In this post I will be comparing Google Cloud speech-to-text, Amazon Transcribe and Rev.ai, three of the most popular speech-to-text services available today.

Automatic speech recognition (ASR)  has always been a difficult problem for computers not only because humans all speak so differently but because there’s an infinite number of variables that come into play including sound quality, background noise, intonation, accents, filler words, laughter,  etc. For most of us, we simply don’t speak the way we write so asking a computer to guess what that speech might be in writing is actually a remarkable task.

I tested the 3 services mentioned and compared them for factors such as accuracy, pricing, functionality, features & customizability. We will cover: 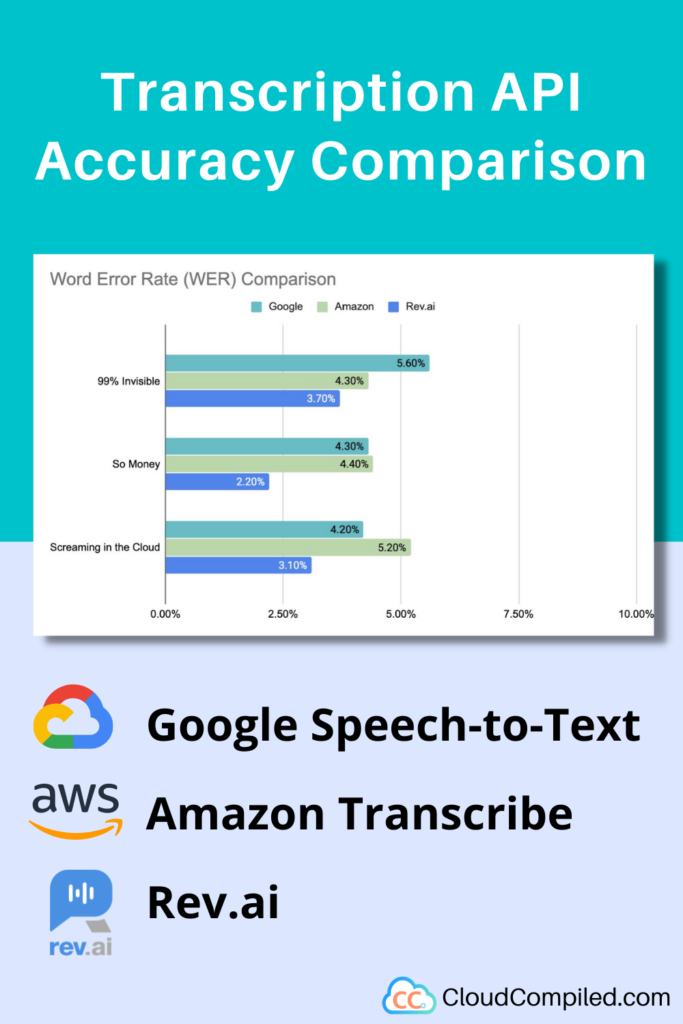 This is subject to change but at the time of writing:

Which Speech-toText API was the most accurate?

For running these tests, I chose episodes from 3 podcasts of varying styles/formats.

Measuring the accuracy of transcribed text generated by automatic speech recognition is a challenging task because different errors tend to affect readability and usability in different ways. Simply tallying errors isn’t enough as some errors can completely alter the intended meaning whereas other errors might leave the meaning in tact and have very little effect. Therefore, I decided to use 2 different methods that hopefully compliment each other to give us better insight into accuracy:

The Word Error Rate (WER) is the most commonly used metric for evaluating the accuracy of transcripts generated by Automatic speech recognition models and is calculated as follows:

Lower WER values suggest higher accuracy. The score represents how often an error occurred in a given transcript. For example, for audio with 1000 words, a 5% Word error rate means that there were errors with about 50 words , or on average about one error for every 20 words.

I used the  JiWER Python package to calculate WER values. I also used this package to perform some basic normalization of the text such as removal of punctuation and letter capitalizations prior to calculating the scores. 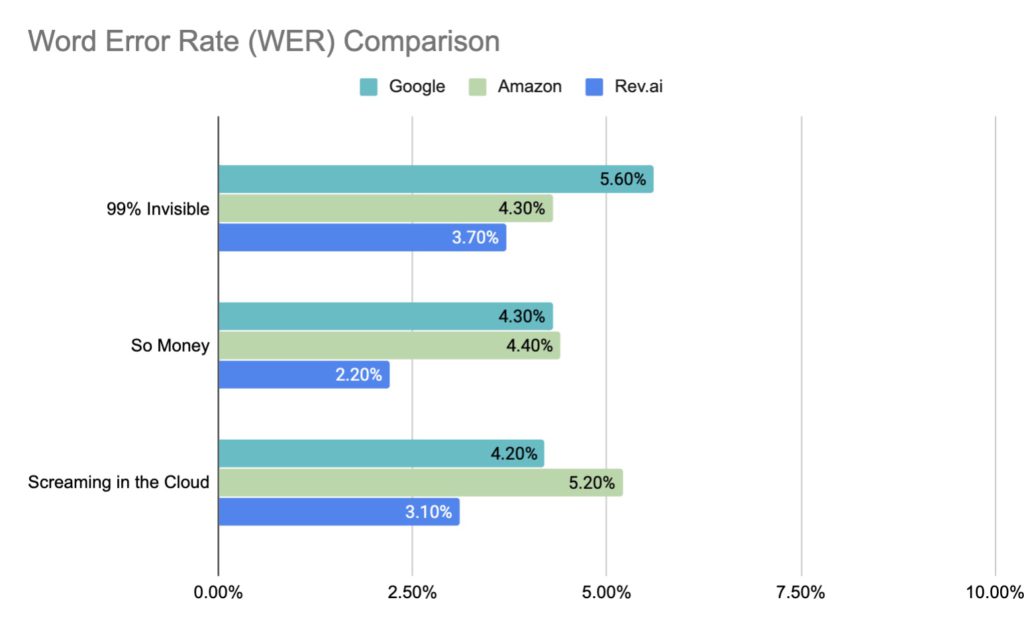 While WER numbers offer some insight into accuracy, it’s also a limited metric because it treats all errors equally.  For example, “bat” transcribed incorrectly as “brat”  and “cast” transcribed as “casts” would both be counted as equal mistakes.  However, while cast and casts are versions of the same word and are unlikely to affect usability of the transcription, bat and brat are completely different words and therefore have the potential to alter the original meaning of the spoken audio.

In addition, WER calculations do not take into account punctuation or proper letter casing since these are removed prior to calculations. Therefore, these measurements should be treated as an insight, rather than a full picture on accuracy.

The second method I used for measuring accuracy was to check text similarity. The idea here is that rather than counting the number of errors, you check how similar the transcribed text is from the original transcript, using a certain criteria.

To do this I decided to use a paid API that analyses 2 text sources and uses AI/ML to output a similarity score. These kinds of API are often used in plagiarism detection software. This particular API that I used compares the 2 text sources and tells you which parts of the text were classified as identical, slightly different, related meaning or omitted. (Examples shown below). The labels were not always perfectly assigned for every single word but for the most part it did a very decent job of categorizing correctly. The advantage of using this method is that it doesn’t ignore punctuation/case and all mistakes are not categorized equally so it provides more information about the performance of each service.

Below are examples showing the original transcript vs. generated transcript for each service, highlighted based on the following categorizations:

So which transcription service should you use? It really depends on your use case but here’s what I can say based on my tests and research:

It’s exciting to see how far Speech-to-text has come in the last few years. I remember doing tests for Amazon Transcribe even just a year or 2 ago and the leap in accuracy from then to now is striking. It’s evident that these services are constantly updating and improving their models. As more competition pops up, no doubt the race towards better transcription will continue to accelerate.